- May 21, 2018
The two of them walked into the museum wide eyed and slightly tipsy, intoxicated off the drink, and off the possibilities… the opportunity for a spark to grow, and grow. They walked the corridors of the space, walls filled with art of every kind, and yet, what he admired most was her. She was art to him,  God’s most natural painting. She catches him staring and smiles. It had been so long for him, to have that kind of feeling, the nervousness, the wondering…for far too long he had shut himself off from such a thing. If mastering a skill takes thousands upon thousands of hours, then surely he had mastered the skill of being single. She had spent so many other dates trying not to care, trying not to fall, and she had succeeded in doing that. But this...was different. The harder he tried not to like her, the deeper she penetrated his barriers, and at last, after much struggle, he gave in to her smile, her charm, and let free of all his worries. The two walked the corridors of the museum filled with the beautiful art as they held hands. Often separating, but never too long, their movements playing out like a ballet of great stature. The light shoulder brushes, the hand on the small of her back, her arms coming around him, these were the signs of intimacy that were building. These were the makings of love songs and poetry. He kept her within reach as they wondered along and he thought to himself, now inspired to create, the irony of his muse, being with him now in the museum. Is this why people go to the museum, he wondered? Not just to see art, but to be inspired to create it as well? The two of them walked through the corridors of the museum, holding hands, smiling, talking, and laughing. And as he looked around and saw the same from everyone else, of different color, race, sexuality, he realizes that the greatest art, was this, them, us, love. 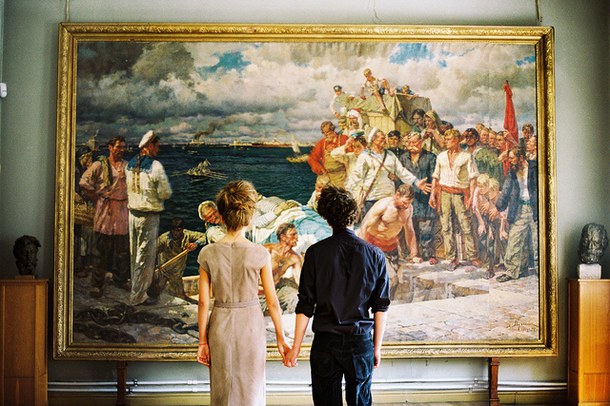